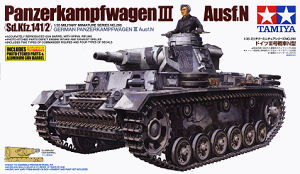 
The fit of the front and side plates to the inner box is very good not requiring any trimming as is the fit of the upper and lower hulls as we come to expect from Tamiya. If building the spaced armour versions there is the separate 20mm spaced armour panel with small extended mountings for the spaced armour panel that are rather simplified if you want to get picky but mostly perfectly adequate if you didn't want to update with etched parts from sets available separately.

These include the tools, jack, Notek and tail lights with the tools having their clips moulded on but it would be easy to trim these off if you wanted to use any of the etched tool clips available separately to improve the look. The main shell turret is the Ausf. L turret without the side vision ports and a separate front plate, gun mantlet as well as the side hatches with the surface detail being well done such as the top flush screws.

The overall dimensions again match the data with such items as the gun barrel lengths and gun housing being well within acceptable tolerances. The main change for the Ausf. N is the inclusion of the 7. Barrel rifling. There is the full gun and breech included as well as the side guards and lower shell basket on the inside of the turret but the co-axial MG34 only has the outer barrel section and adding the full MG receiver will finish off the gun mounting better.

There is an opening in the inner gun mounting that makes adding the receiver easier should you decide to do this?

The main gun housing is in two halves leaving a small join seam at the sides requiring attention and has the square profile captured well and with fine weld seams and other details with a separate end sections. There are two alternate barrel sleeves, one with notched or smooth end caps depending on the decal option being used. The kit has two mantlets, the initial one from the Ausf. J kit and a new one for this kit so make sure you use the correct mantlet for this kit part F1 which has just the left side vision port moulded closed for the Ausf.

The side crew hatches have the frame added from inside the turret and the separate doors have nice detail on both sides if you wish to show these open as well as a separate rain guard for above the doors with no other internal turret detail other than the gun mounting. L kit and has the cupola in three parts, two parts for the cupola drum with open visors when fitted together and the separate top hatch ring as well as two top hatches with basic internal details.

Other details added to the turret include the top ventilator, the crew entry grab handles and small two part lifting hooks for the upper corners of the turret as well as separate pistol port for the rear wall. Also included for this version are the six smoke grenade launchers for the turret sides and these have separate pots with alternate pots with and without grenades fitted, as well as the mounting plates which could do with being thinned a little and you would only need to add the wiring to finish off the assemblies. The instructions indicate these pots are only fitted to one of the decal options so you should choose the version you are building before hand when fititng these.

At the back is a two part turret bin with main bin shell and separate top which makes into a nice representation of the standard Pz. III turret bin. The kit provides two figures, a full Commander figure from the Ausf. L kit and a new full figure with a choice of right arms, one in a casual pose and the other holding a signal pistol. The uniform detail is adequate and should come up okay with careful painting with both having separate one piece heads with good facial detail and the new figure also has a separate set of head phones and binoculars to add as you wish.

The original figure is designed to stand in the cupola with the arms positioned to be leaning the hatch sill while the new figure is designed to be posed away from the vehicle in a diorama. View more info. By: Bouchery, J. Publisher: Casemate: Includes measurements and variations. By: Bradford, G. Publisher: Arco Publishing Company: Paperback; very good in creased card covers. First edition. Hardback; edge of pages yellowed otherwise very good in yellowed dustjacket. From the first Italian campaigns and the German advance on El Alamein, to the final Allied victories.